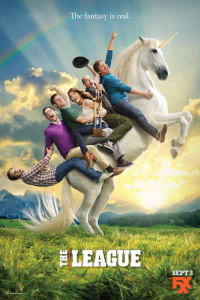 The League - Season 6 is a Comedy, Sport TV Series whose creators are Jackie Marcus Schaffer, Jeff Schaffer. It was released on 3 Sep. 2014. It stars Mark Duplass, Jonathan Lajoie, Nick Kroll. The season begins with: Kevin struggles to deal with Jenny winning the Shiva. Meanwhile, the guys attend a funeral… What await ahead?