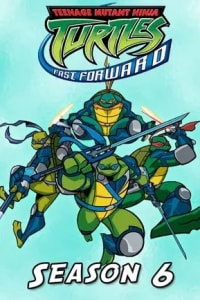 In season 6, the Turtles are in the future and new enemies are seen. Most of the old characters are not in this season at all. The Turtles and Splinter have different designs in this season. The sixth season (subtitled Fast Forward) originally aired between July 29, 2006 and October 27, 2007, beginning with the “Future Shellshock” episode.