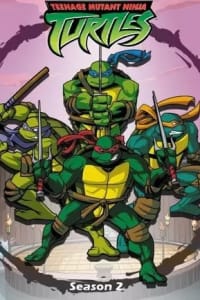 In season 2 opener, Our four heroes find themselves beamed halfway across the universe to the planet D’Hoonnib and right into the middle of a police action! Teenage Mutant Ninja Turtles’ second season originally aired between November 8, 2003 and October 2, 2004, beginning with the “Turtles in Space, Part 1: The Fugitoid” episode.