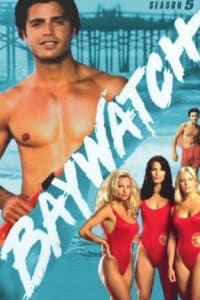 In the fifth season, Caroline Holden became a regular cast member and it also introduced new characters such as femme fatale Neely Capshaw (first appearing as a guest star played by Heather Campbell) and Logan Fowler. This season shows the departure of Garner Ellerbee who appears in the spin-off Baywatch Nights, but later guest appears in a episode of Season 8.