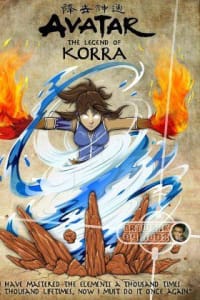 The third season of the animated television series The Legend of Korra, titled Book Three: Change consists of 13 episodes. The season takes place largely in the Earth Kingdom. It opens with Korra trying to restore the streets of Republic city, and learning that her decision to keep the spirit portals open has created a new conflict between humans and spirits, and triggered the emerging of new Airbenders.

The Legend of Vox Machina - Season 2